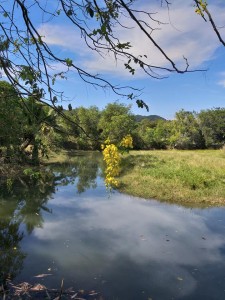 The lake in early morning 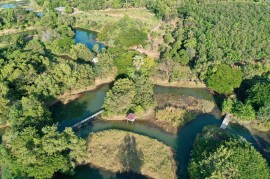 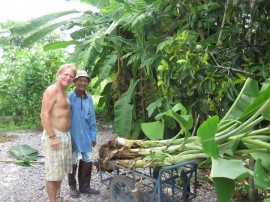 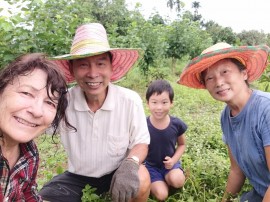 With volunteers at the farm 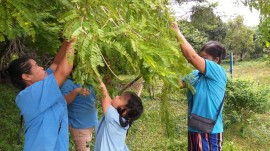 From Swamp and Rocks to a Fruit Forest

The lake in early morning

From swamp and rocks to a fruit forest

When we bought the land people scoffed - what are you going to do with a swamp? I said the water might be useful in the future. I had realised the land was special when I noticed nearby ponds of turquoise water and both my husband Surin and I felt its magnetic pull the first time we went there. It was around New Year 2006 when we explored it for the first time as the owners. We had to push our way through thick tussock and be careful where we put our feet, as in some places there was water covered in a thick matting of reeds. The only visible water was a couple of muddy ponds. Strung up beside one of them was a net with a kingfisher struggling in it which we rescued.
I had seen on old maps that our local village used to be called White Water Lake. It was named after this special place. Our neighbours told us that there were underground springs there and it used to be the local supply of fresh water. Surin hired a massive digger and after several weeks of earthworks we had created a new White Water Lake with an island and wetlands in the middle. The dirt we dug out was used to build a walkway around it and to fill in one part of the swamp where we planted some fruit trees and created three rice paddies. Another area was left alone as the previous owner had dug it out and sold the dirt, leaving behind a rocky low-lying patch that flooded every rainy season.
The water that bubbled to the surface of the lake was a beautiful turquoise colour and in the early days we liked to swim in it - it was like a spa with bubbles of cold and warm water rising to the surface. Afterwards our skin was soft from the calcium in the water which gave the blue colour a milky tint - the reason, I think, why it was called White Water Lake.
The land had no road access and over the next couple of years we bought some adjoining plots and a track down to the road. On one of the plots there were a few old fruit trees and a small rubber tree plantation.
Eventually we cut down the rubber trees and began establishing a new fruit forest. In the canopy there are mangosteen, rambutan, durian and longkong, underneath some smaller trees like citrus and cacao, a few trellises of passionfruit, bananas and papaya which are quick maturing and which provide shelter for the young trees and banana leaves and trunks make great mulch. Closer to the ground, and as companion plants, we have many different kinds of herbs and vegetables. Altogether our plantings in this section include limes, kaffir limes, somjit, cacao, mulberry, cassava, pineapple, neem, galangal, Siamese cardamon, cardamon, plai, ginger, pueraria mirifica, peppercorns, chilli, lemongrass, sweet basil, holy basil, hairy basil, wild pepper, pandanus, gotu gola, turmeric, aloe vera, sugar cane, eggplants, peanuts, banana, papaya, okra, garcinia cowa, longan, pomelo, cinnamon, agarwood, nutmeg, vanilla orchids, amlaki, beleric myrobalan, camphor, michelia and other fragrant trees and plants used in Thai and Ayurvedic medicine.
This year we decided to plant a new orchard in the wild area - so once again we hired a big digger to reshape the land, with the water drained off into canals and ponds and planted around 150 durian trees. Now we have over a dozen different varieties of durian including three that I planted from seed about 13 years ago on the edge of our rice paddy. It will take five years for all our trees to come into full production,
We have retained a couple of wild areas - on our island and in another corner of our land. In addition to growing a great diversity of food this provides shelter for wildlife, including many different varieties of bird. We take guests from our resort Faasai Resort and Spa to visit and volunteers come to work on the land. We learn from each other. On our side we can share knowledge about Thailand's sufficiency economy, nature farming, forest gardening, permaculture and biodynamics as well as the local wisdom.
I presented this story in a seminar for people interested in regenerative agriculture In August 2021 and recorded it here .

With volunteers at the farm